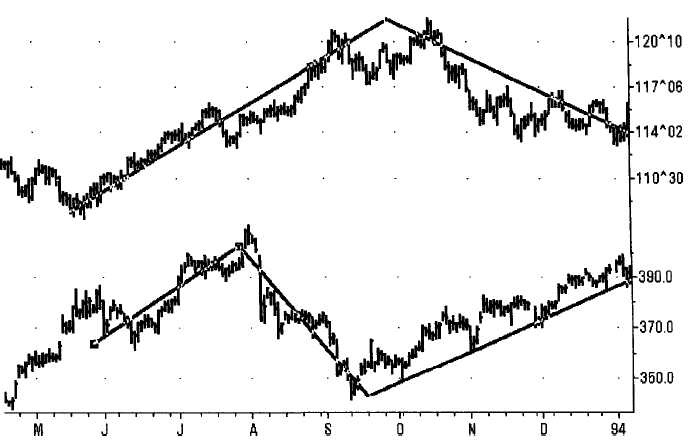 Figure 4.33 Bond (top) and gold (bottom) prices generally, but not always, move opposite one another. Thus, intermarket relationships are often imperfect.

Other intermarket relationships occur with positive correlation. This means that the prices of some commodities rise and fall together. For example, rising crude oil prices suggest potential inflation, and we should expect gold prices to rise. You can use the currency markets as another good example of correlated markets. Exchange rates reflect long-term fundamental forces in the economy such as inflation and interest rates. Thus, we expect the U.S. dollar to decline at approximately the same time against other foreign currencies such as the Japanese yen and the deutsche mark. Thus, we should expect that Japanese yen and deutsche mark prices are correlated, and we should be able to generate buy or sell signals for one market from the other.
There are several difficulties involved with exploiting intermarket relationships. First, weak intermarket cause-and-effect relationships have time lags. Thus, the price of copper may rise for several months before bond prices begin to fall. This difference in the timing of peaks and troughs among related markets is called a time lag. The problem is that the time lags are neither constant nor consistent. 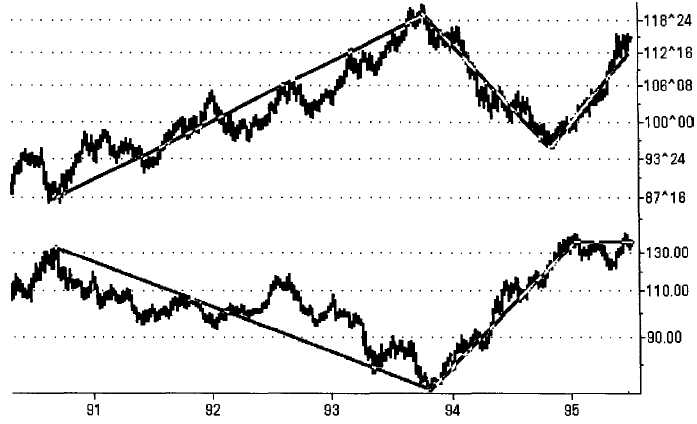 A second difficulty is that each market has its supply and demand forces, which will often distort the usual intermarket relationships. For example, we would expect copper and gold prices to move up or down at about the same time. However, there have been periods when gold and copper prices have moved in opposite directions (Figure 4.35). Thus, any systems built on intermarket forces will not be correct all the time.

A third problem is the internal technical condition of each market. Each market can become “overbought” or “oversold” at different times. The usual intermarket trends are broad trends, which could unfold over many months. Hence very short term trends in the markets can move opposite the cause-and-effect relationship. Such movements can complicate your entry signals because they can trigger a risk control exit without changing the underlying trend. 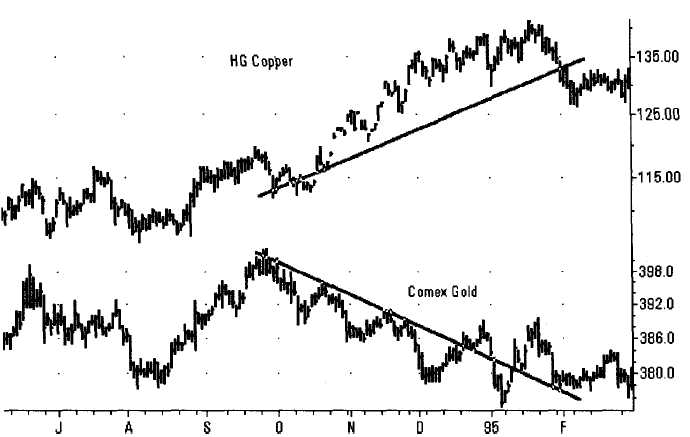 Figure 4.35 An example of copper and gold prices moving in opposite directions in late 1994-early 1995.

All these issues influence the precise form of relationship you select for your system. You must also decide if you want to relate two markets or more than two markets.

The gold-bond system, which assumes that bond prices move in the opposite direction of gold prices, is a simple but effective example of how to construct an intermarket trading system. The system assumes that rising gold prices signal potential inflation and thus influence the bond market. We will use a dual moving-average crossover system, using arbitrary 10-day and 50-day simple moving averages to build the system. Here are the rules:

These rules say that an upside crossover of the moving averages signals rising gold prices and therefore predicts falling bond prices. Here we have not used any filters for the emerging trend in the gold market, but you could certainly use the ADX indicator. To use the ADX filter, simply require that the 14-day ADX be rising, and determine the direction of the short-term trend by comparing the 3-day SMA to the 20-day SMA. The specific rules for the ADX-filtered system are as follows:

We tested both of these models on U.S. bond and Comex Gold continuous contracts from August 23, 1977, through July 1, 1995, with an initial $5,000 money management stop and $100 allowed for slippage and commissions. As discussed above, the short-term trends in the markets can be a problem for trade entry. The results are summarized in Table 4.15.
These results suggest that there is indeed a broad inverse relation-ship between gold and bond prices. However, from a trading perspec-tive, only about half the signals are profitable. The filtered gold-bond system was significantly more profitable than the dual moving average crossover system, with about half the maximum drawdown. The gold-bond system could function as a filter to check whether the “trading environment” favors rising bond prices.

We know that there are lags between the price movements among markets. Since a hint of inflation can move many other markets, we should check out the basic gold-bond system on other market combinations, such as the soybeans-bond, copper-bond and deutsche mark-bond combinations. The grain markets often signal inflation, and the soybeans market is used as a proxy for those markets. The copper market follows strength in the industrial sector and is a leading indicator of inflation. Lastly, interest rates signal broad forces in the economy that also influence the currency markets, such as the deutsche mark. We used the gold-bond system for negatively correlated markets with the same $5,000 initial stop, one contract per trade, and $100 for slippage and commissions, and tried to generate buy and sell signals for the bond market from the markets indicating inflation.

The data in Table 4.16 confirm that changing trends in markets heralding inflation can be used to trade the bond market. Of all the combinations tested, the copper market seems to provide the best indication. In every case, only about half of the signals were profitable. Thus, these systems follow the well-known principle of economic forecasting: if you must forecast, forecast often.
So far, we have used only one market to develop trading signals for bonds. However, you could use more than one market to derive trading signals. We tested the use of two markets, gold and soybeans, to develop trading signals for bonds. We chose these two markets because they seemed to have unrelated supply-demand forces. We also tested the gold, copper, and bond combination for completeness. 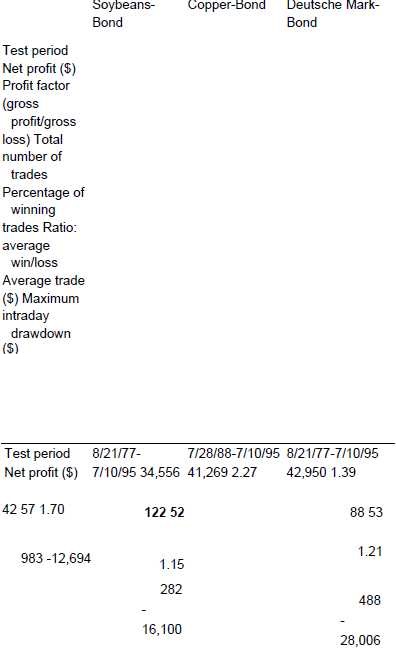 Table 4.16 Results of testing the gold-bond system on other market combinations

We extended the basic gold-bond system to three markets by specifying that both gold and soybeans must be trending up or trending down at the same time to generate the opposite signal for bonds. For example, if the 10-day SMA of the daily close was below the 50-day SMA for both gold and soybeans, then that would trigger a buy signal for bonds. The results of the historical tests for the combined gold-soybeans-bond system were better than either the gold-bond or soybeans-bond systems. As usual, we used a $5,000 initial stop and allowed $100 for slippage and commissions.

The test results in Table 4.17 show that using three markets reduced the total number of trades, as you would expect. For example, the gold-bond tests and soybeans-bond tests produced 122 trades, whereas the gold-soybeans-bond trio produced only 77 trades. The profit factor also improves with three markets, as you would expect from improved filtering. For example, the gold-copper-bond trio had an impressive profit factor of 2.53, and produced essentially the same profits as the copper-bond combination with 35 percent fewer trades. These tests show that you could try to improve the effectiveness of intermarket systems by using three or more markets to filter out the signals. Note that as you add more markets, the effectiveness often decreases because of random noise among markets.

The basic gold-bond system tries to capture the weak negative correlation between the gold and bond markets. Such correlations also exist among other markets. Most trend-following systems have tested out poorly on the crude oil market, losing more than -$40,000. A negative correlation exists between crude oil and corn (Figure 4.36), and between crude oil and short-term interest rates. The Eurodollar market can be used as a proxy for short-term interest rates. Results of tests of the gold-bond system as developed on the corn-crude oil and Eurodollar-crude oil combinations are shown in Table 4.18. These tests use trend change signals from the corn and Eurodollar markets to trade crude oil. 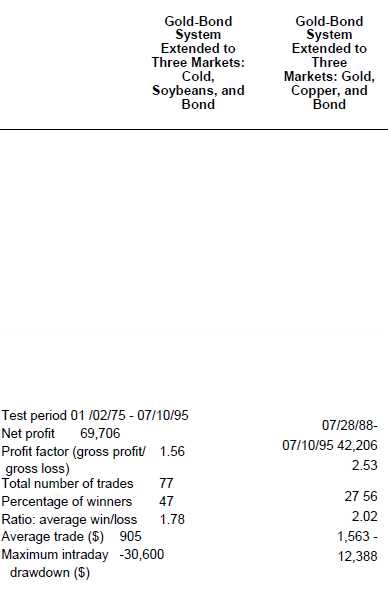 The results show that the gold-bond system could be used to make a small profit on the crude oil markets, if we derive our signals from the corn market or the Eurodollar market. This is a big improvement over the results for typical trend-following systems.

Thus, these results show that you can use the gold-bond system to trade weak negative correlations among markets. The negative correlation between crude oil and corn is not obvious; it may have to do with the rising costs of international shipments—as crude oil prices increase, transportation costs increase, and U.S. corn producers must pay for flie higher costs by lowering corn prices. The inverse relationship between rising crude oil prices and short interest rates is through the fear of future inflation. 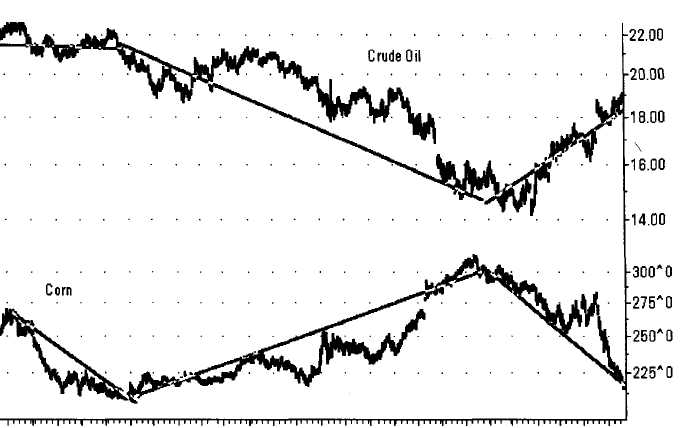 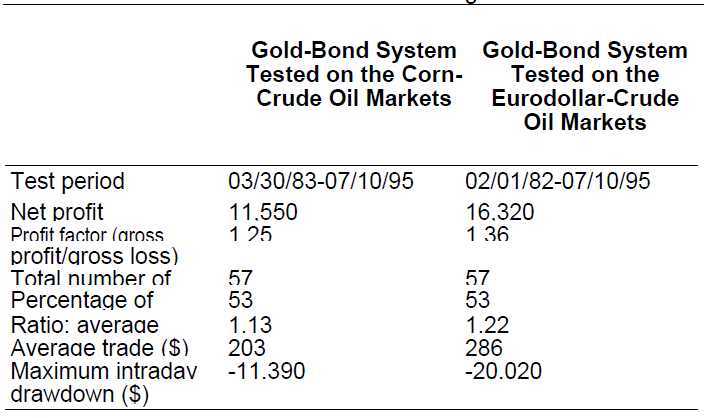 So far, all the intermarket systems we have discussed exploited the negative or inverse price relationships between markets. You could certainly extend these ideas to trade positively correlated markets, in which a rising trend in one market would be a buy signal in the other market. The Japanese yen-deutsche mark combination uses trend change signals in the Japanese yen market to produce signals for the deutsche mark. The corn-live hogs combination uses trend changes in corn to generate signals for live hogs. Since corn is fed to hogs, rising corn prices could increase the production costs for hogs (see Figure 4.37). To test the gold-bond system in these correlated markets, we use a $5,000 initial stop for the currency markets, but only a $1,000 initial stop for the live hog market due to its relatively low volatility. As usual, we deduct $100 for slippage and commissions (see Table 4.19). 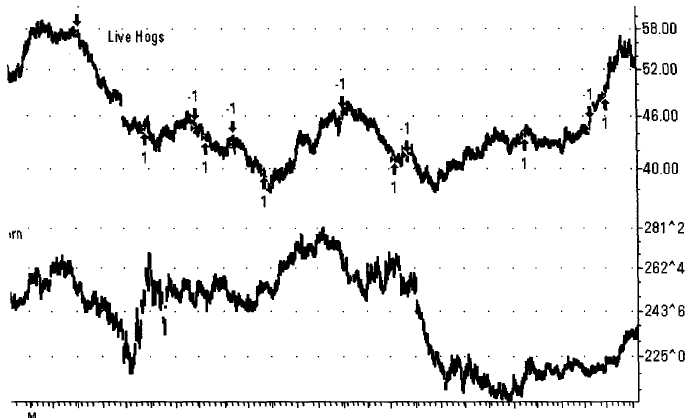 Figure 4.37 The relationship between corn prices and live hog prices. 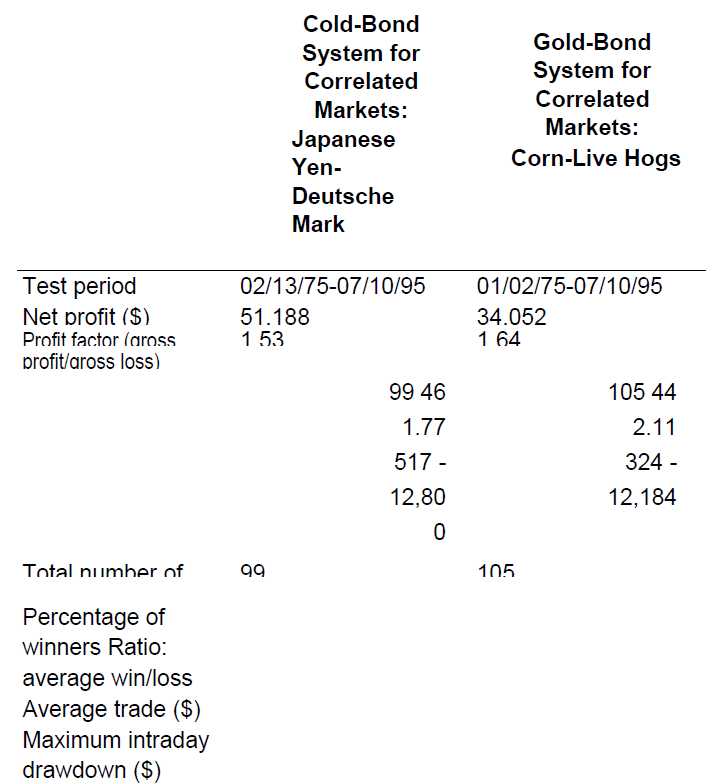 Table 4.19 Gold Bond system extended to correlated markets, such as JY-DM and C-LH.

In summary, these results show that you can successfully use correlated markets to generate trading signals. You may feel more comfortable with the signals from intermarket systems because there are weak cause-and-effect relationships that have stood the test of time. At a minimum, you could use intermarket analysis to develop “background” information that could be used as input into your money-management algorithm. For example, an intermarket system signal could be used to increase the size of existing positions or put on new ones. You could also use an intermarket signal as an exit strategy for conventional single-market systems.

What’s the Finest Forex Trading EA?
Forex Signal 30 is the best forex system since 2009 and has been used by thousands of traders from around the world to generate profit in forex trading. This system is created by our team of Brilliant Forex Signal Team, this system is made as simple as possible for beginner and professional traders.
« Prev

Forex: A Trend-Antitrend Trading System
Next »

Trading Strategy: A Pattern for Bottom-Fishing