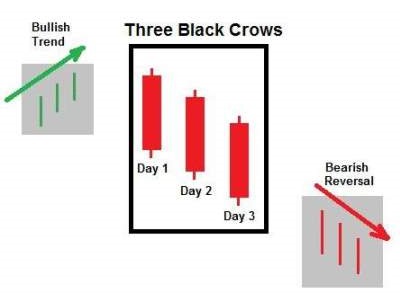 Each of the three candlesticks in the Three Black Crows pattern must be a relatively long bearish candlestick with each candlestick closed at or near the low price for that period. Each successive candlestick should mark a stable price movement and should not have a long shadow or long axis. We recommend that every candle in this pattern should have an open level in the real body candlestick beforehand in this pattern but this is not an important requirement.

If this pattern appears in an ascending trend, this indicates potential for a trend weakening and a possible trend reversal (reversal). However, if the three candles above move down or make significant price reductions, then you may need to be alert of oversold conditions.

Unlike in the Three White Soldiers pattern that resembles the other patterns of Advanced Block and Stalled patterns. The similarity is that these three patterns are equally composed of three brightly colored candles (bullish). While the Three Black Crows have in common with the pattern of Advanced Block and Stalled pattern because of its emergence when there is an uptrend. But it also has the difference that the pattern of Three Black Crows has a third form of the candlenya is dark (bearish).

These five patterns are a moderate pattern, meaning to be considered to setup according to their respective functions.

Forex Trading Profitable Basic Methods
Forex Signal 30 is the best forex system since 2009 and has been used by thousands of traders from around the world to generate profit in forex trading. This system is created by our team of Brilliant Forex Signal Team, this system is made as simple as possible for beginner and professional traders.
« Prev