How to use ADX indicators

How to use ADX indicators

ADX or Average Directional Index is a technical analysis tool that is used to measure how strong a trend is and not to determine where a price is moving (such as a downtrend or an uptrend). And also keep in mind that this ADX indicator is a late indicator or lagging to anticipate price movements but if used by a reliable trader it can be a great tool.
This indicator has a scale of 0-100 by reading it as follows if it is below the scale of 20 then the trend is weak and if it is above the scale of 50 then the trend is very strong. For example, let’s look at the graph below: 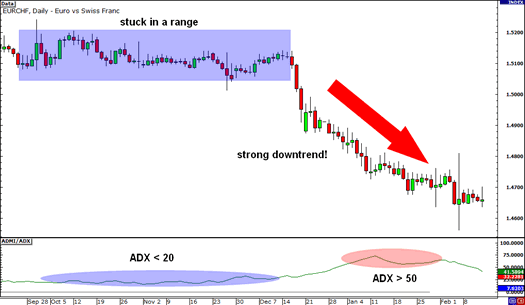 In the example of the EURCHF chart above, ADX has been under the scale of 20 for a long time, starting from the end of September to December. And we can also see in the graph that EURCHF is stuck in the price with the price range as above for a long time. Starting in early January ADX began to climb to a scale of 50 which indicates the start of a strong new pattern to be ready for us to follow.
As predicted using ADX, EURCHF has a breakdown to form a strong downtrend pattern with around 400 pips can be obtained to take home! 🙂
Now we see another example as shown below: 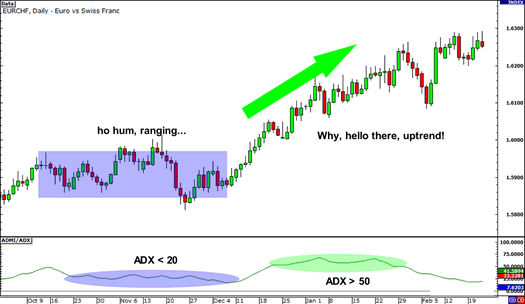 Like the first example above the EURCHF is held below the 20th scale long enough and a few moments later the EURCHF starts towards the 50th scale which shows the strength of the trend to form an uptrend ( breakout ) pattern. And you can get around 300 pips and take it home too! 🙂

How to trade using ADX

There is only one way to trade using this indicator which is to wait for a breakout or breakdownbefore determining whether to open a long ( buy ) or short ( sell ) position. ADX can be used as a confirmation signal whether the trend will continue or not. And can also be used to determine when we close a trading position early.
For example, when ADX starts to fall below the scale of 50 then we can get ready to close the position because it is likely that a sideways pattern will be formed. You can also combine this indicator with other indicators that function to determine the direction of price movements such as MACD , Stochastic or RSI .
Tags: ADX
Tweet

How to use ADX indicators
Forex Signal 30 is the best forex system since 2009 and has been used by thousands of traders from around the world to generate profit in forex trading. This system is created by our team of Brilliant Forex Signal Team, this system is made as simple as possible for beginner and professional traders.
« Prev

How to use the RSI indicator