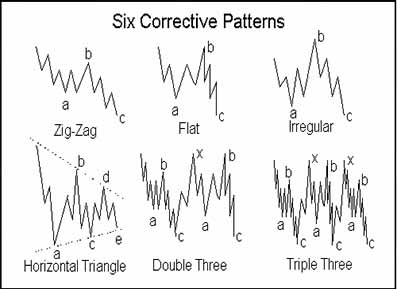 Corrective waves are more difficult to recognize than impulse or motive waves and are harder to label in real time. There is one important rule for correction waves: they never form five waves. Only impulse waves form a five-wave pattern. However, one or more corrective wave subordinate waves may consist of five wave patterns, though this is not a rule we will soon see when discussing different types of corrective waves.

There are two guidelines that apply to corrective waves on the Elliot Wave theory.

The second guide is Equality: wave A and wave C tend to be about the same length. This guide can be used to determine where C wave tends to end.

There are a total of four types of basic wave patterns for correction: zigzag correction, flat correction, triangle, and correction combinations.

Zigzag correction consists of three wave patterns labeled A-B-C. The lower level subordinate waves that make up the zigzag correction form a wave number of 5-3-5. In this correction, waves A and C are impulse waves and wave B is a corrective wave at a lower level. Zigzag correction may be extended to form a double zigzag or triple zigzag with each zigzag separated by an intervening wave having three subordinate waves and labeled X. You can often anticipate double zigzags when wave C of zigzags appears but does not meet its normal target. Although this is not a difficult rule.

Tips on how to Implement Good FX Money Management Methods

Which One Do You Like, Short Term or Long Term Trading?